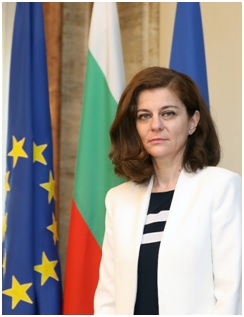 She also holds a number of postgraduate qualifications: Policy and Planning courses at the NATO School, Germany, a Strategic Modular Course at the NATO Defence College in Rome, Italy, a course in International Relations at the Defence Academy of the United Kingdom in Shrivenham, England, and a Strategic Course in Military Diplomacy at Naval Air Station Pensacola.

Ms Genchovska is an expert in security and defence matters. She began her professional career at the General Staff of the Bulgarian Army and after a series of successive promotions progressed to the position of Head of the NATO and European Union Department at the Ministry of Defence.

Teodora Genchovska served as Defence Adviser at the Permanent Representation of the Republic of Bulgaria to the EU and the Permanent Delegation to NATO. She worked on the preparation and participation of Bulgaria in NATO summit meetings and was part of the Bulgarian delegations at the NATO Summits in Istanbul, Wales, Warsaw, and Brussels.

Ms Genchovska was Minister of Foreign Affairs in the cabinet elected by the 47th National Assembly on 13 December 2021.

By Order of the Prime Minister Galab Donev, Ms Genchovska was appointed Deputy Minister of Defence and assumed office on 3 August 2022.